Can you decipher this message? Let us give you a hint: It’s part of GAY TIMES‘ mission to support the Trans community who, unfortunately, is subject to increased transphobia and hate coming from both the global media and from right-wing groups. More recently, the LGB Alliance has called for the letter “T” to be removed from the LGBTQ+.

Launched at GAY TIMES Honours during Trans Awareness Week, the “Incomplete Without the T” initiative, which is part of the magazine’s Amplifund philanthropic campaign, aims to raise awareness around the issues faced by this community. Via this action, the media brand wants to show the world what happens when one erases a letter from words. 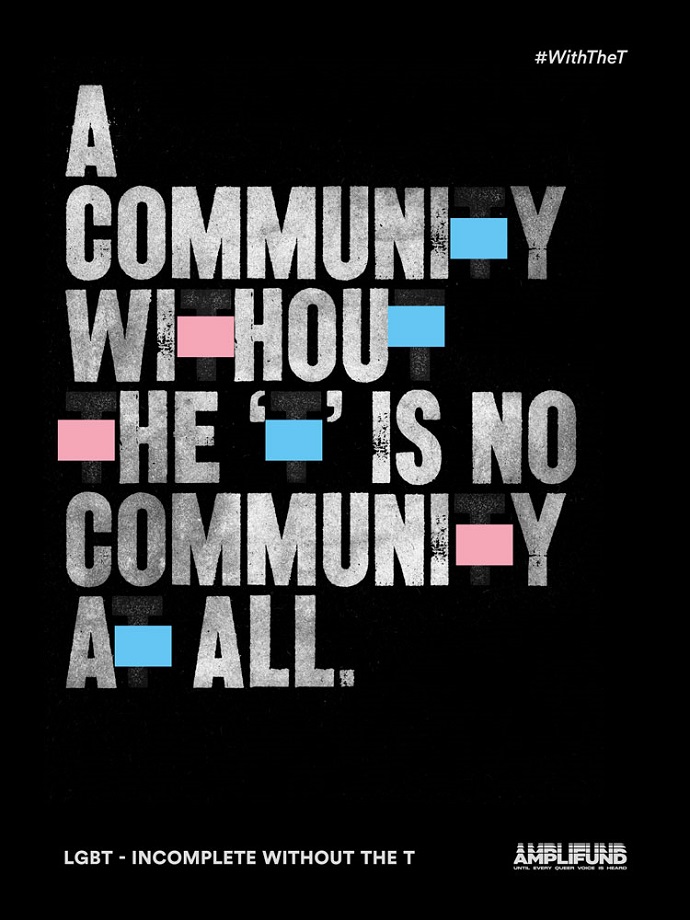 You’ve probably figured out what you need to decode the GAY TIMES message by now. It’s the letter “T.” Removing letters from words prevents people from understanding the meaning of a sentence. The letters are like puzzle pieces that, once put together, work on painting the whole image. In their absence, the “words” built have no meaning, phrases make no sense, and thus the message’s essence loses its intensity.

Created with Grey London, the campaign is developed on the idea that when letters are removed from words, people are actually removing “both the comprehension and the unity behind it” — the same happens when erasing the letter “T” from LGBTQ+.

Tag Warner, CEO GAY TIMES, says: “We created Amplifund in partnership with the award-winning LGBTQ+ human rights charity GiveOut to amplify queer voices to global audiences and support LGBTQ+ activists around the world in their campaigning and media work. This new campaign with Grey London, launched in person at GAY TIMES Honours to an audience of over one thousand members of our queer community and allies, highlights the importance of ‘the T’ in LGBTQ+. With 2021 being the deadliest year on record for Trans people, it is more important than ever for us as a business, and as a community, to stand with our Trans brothers and sisters and reinforce the message — we are incomplete without the T.”

Warner introduced the campaign film, inviting the audience to join them in their movement to support the Trans community by using the hashtag #WithTheT across social media.

Laura Jordan Bambach, President and CCO UK at Grey, adds: “Trans people have led the way in LGBTQ+ rights from the Stonewall riots to our own rallies and direct actions here in the UK. To be Trans today is to be faced with even more discrimination, hate, and the potential for violence than many other areas of our community. So, it’s fundamentally important that we are never LGB without the T and we stand together to protect the hard-earned rights and acceptance we have, and those still to fight for. We’re incredibly proud to have launched this campaign with GAY TIMES at this vital time in our collective history.”

“We just couldn’t understand why anyone would want to remove the T from an acronym that stands for unity and equality, especially when Transgender people have played such an important role in LGBTQ+ history and such an important part of the queer community. We created this campaign to remind people of that fact. It’s something we both feel really passionate about,” conclude Chaz Mather and Lucy Jones, the creatives behind the initiative.

Complemented by OOH advertising and social posts across the brand’s channels, as well as queer influencers and allies showing their support, GAY TIMES hopes to get more people involved in this move. With a focus on making other media outlets, brands, and charities join the initiative, the brand aims to show “how we, as a global community, are incomplete without our Trans brothers and sisters — without the T.”

The Perception of Color in Branding

The Perception of Color in Branding