They say good things come in threes. That’s the truth for Cabernet Sauvignon wine lovers this year because 2014 completes the holy trinity of exceptional vintages in Napa and Sonoma, following the superstar harvests of 2012 and 2013. Many Napa and Sonoma Cabernets from the 2014 vintage are available to buy now. Considered a California drought vintage, 2014 enjoyed moderate-to-warm weather from winter to fall, allowing us to craft concentrated, complex Alexander Valley Cabernet Sauvignon at Jordan—our 39th vintage from the king of red grapes. Why is 2014 a great vintage for Alexander Valley Cabernet Sauvignon? There were five key events that led to the smooth-as-silk wine you’ll find inside a bottle of 2014 Jordan. Pour yourself a glass of wine and see if you taste the difference. Cabernet Vineyards Thrived in the California Drought Weather Conditions of 2014

The fourth-driest year on record in California, 2014 enjoyed dry, moderate weather throughout winter with six inches of superbly timed rainfall right before the early bud break in March. Spring conditions remained warm and dry, so the grapevines bloomed early and evenly, leading to the most even flowering and fruit set our winemaker has seen in his career—and he’s been making wine at Jordan since 1976. Extremely dry weather continued in July and August, with only a few heat spikes, allowing the crop to ripen uniformly and develop concentrated flavors. The lack of extreme weather events in 2014, coupled with a critical March rain, judicious irrigation and other water conservation experiments, were key to the quality of cabernet sauvignon grapes harvested in 2014. Grape clusters looked gorgeous and had the kind of intense, fruit flavors of blackberry and cassis that make for a dream vintage. Balance in all things is central to Jordan’s winemaking philosophy and elegant style, and grapevines need help keeping their balance through the growing season. We prune their canes in winter to ensure only a small number of buds emerge at the end of winter, we remove extra buds in spring (called “suckering”) to channel their focus and we thin cabernet sauvignon grapes during veraison to ensure that only the evenly ripening clusters get harvested into the same gondolas. Between the lack of rainfall from the California drought and the warm weather, the vineyards carried grapes that were average in size and weight in 2014. We never really had to worry about there being too much fruit on the vine, which can lead to less concentrated flavors. A balanced vine in the vineyard makes for a beautifully balanced wine in the bottle. Weather can influence the size and uniformity of a grape harvest during three key phases of the annual growing cycle of a grapevine: spring flowering, spring fruit set and summer veraison. When it’s cool, wet or windy during the flowering of the grapevines, the plants don’t bloom evenly, which means every flower doesn’t form into a berry. If it’s too cool or too hot during fruit set, the grapes that formed after flowering will not grow evenly. Extremely hot or cool weather during veraison, when red grapes change color, can also lead to grapes not ripening evenly. None of these weather challenges occurred in 2014. The grape clusters were healthy and uniform, which means fruit, acids, sugars and tannins were also in sync—another key contributor to balance in the wine. 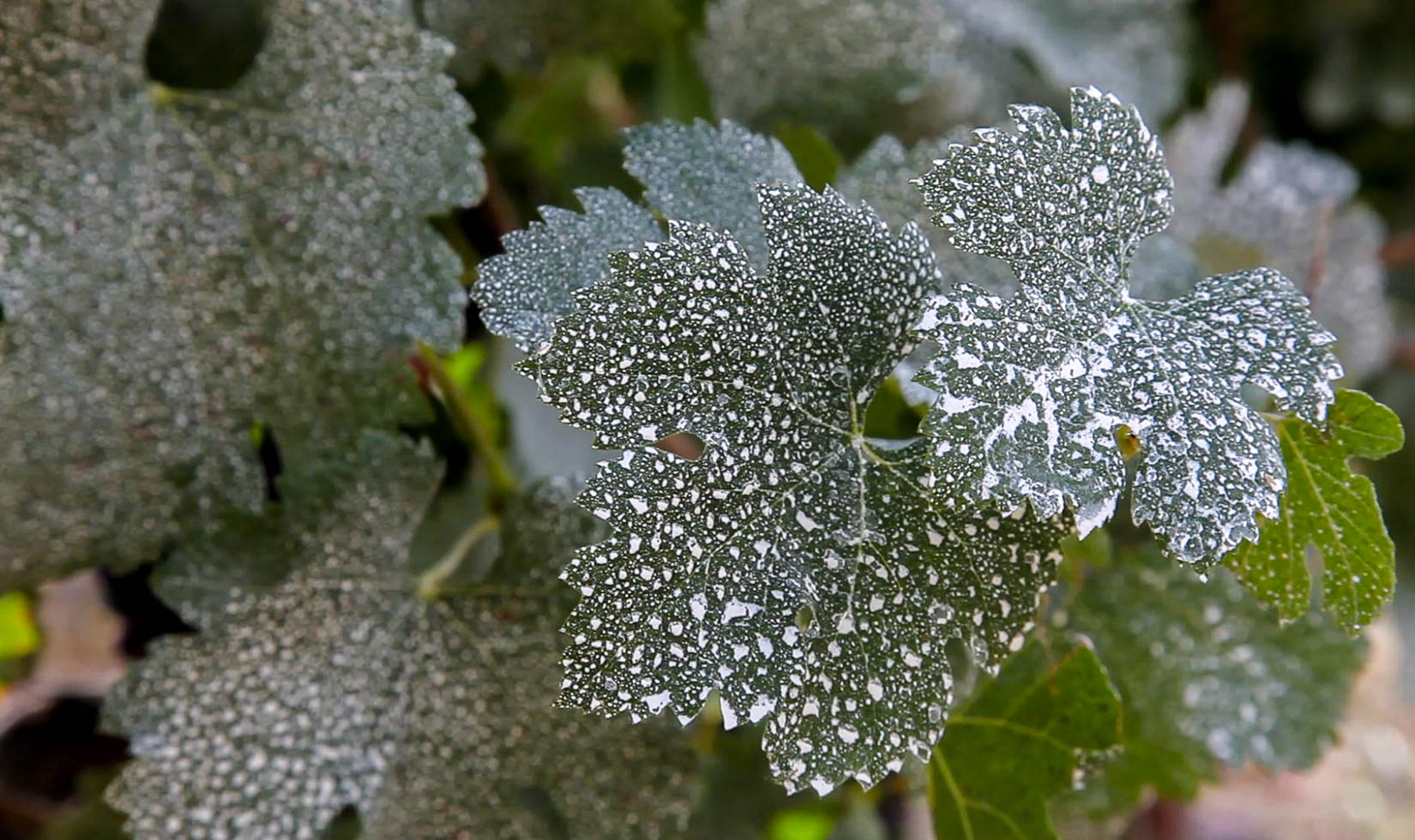 Grapes Did Not Get Sunburned from Excessive Heat in 2014

Grape skin, like human skin, can get sunburn from overexposure to intense sun. Grapevine canopies are shaped and shifted each year to try to find the perfect balance of enough sunshine on the grapes, but not too much. Organic sunscreen is even sprayed on the red wine grapes at Jordan every August to protect them (pictured above). Because 2014 didn’t have the major heat waves or dramatic spikes in temperature like 2010 and 2017, the lack of sunburn for both white and red grapes contributed to wine quality. Sunburn to the skins affects the intensity of fruit flavors. Alexander Valley cabernet sauvignon’s blackberry, black cherry and cassis flavors were pure, concentrated and delicious from the moment the grapes were pressed. Patience was not a virtue for Alexander Valley cabernet sauvignon during the 2014 harvest. Due to the warm weather throughout the growing season, harvest began early for red wine grapes—right after Labor Day. At Jordan Winery, merlot grapes were the first to be picked on September 2, 2014—about 7-10 days earlier than in 2013, which was one week earlier than that. This beautiful weather ensured that Bordeaux grape varieties like cabernet sauvignon and merlot were ripe and ready to be harvested before the autumn equinox, when days gets shorter and the chance of rainfall increases. A mid-September rain shower was a blessing in disguise, which slowed down the picking schedule for thick-skinned cabernet sauvignon, which is one of the few grapes that can handle a little rain without any dilution of flavors. The entire 2014 grape harvest was finished at Jordan by October 10, and we were beyond ecstatic with the quality of 2014 grapes that followed on the heels of two phenomenal vintages.

Dig deeper into the 2014 harvest with our winemaker’s harvest report video and our 2014 growing season blog.

GivingTuesday: A Look Back on Impact for 2022
The 25 Most Important IPAs Right Now, Ranked (2022)
Two Decades Ago, Boston Beer Saved Craft Brewers From a Catastrophic Hop Shortage
Ask a Somm: What’s a ‘Zero-Zero’ Wine?
Ask Adam: Is It Tacky to Serve Canned Cocktails at a Dinner Party?
The VinePair Podcast: Breaking Down Black Friday